After looking at the Genesis port of Golden Axe, I decided to review the sequel which never made it to the home consoles. Golden Axe: The Revenge of Death Adder is often considered the best of the game series. It was released in 1992 for Sega’s System 32 hardware and astonished gamers with its amazing graphics and a stunning soundtrack. It was truly too powerful for Sega to even consider to port it to the Megadrive / Genesis and unfortunate gamers were left with the lackluster Golden Axe II.

The narrative of the game will not shock anyone familiar with fantasy beat-em-ups. The evil Death Adder has been revived and once again he is attempting to enslave the world. There are now four playable characters which enable up to four people to play together simultaneously. Stern Blade is a clone of Ax Battler who has powerful fire magic which completely incinerates foes. Little Trix is an imp with a trident. He uses nature magic which makes trees grow. This causes Apples to fall, which can be collected to refill your life bar. This is a form of support class that comes in handy as the game progresses. Dora is a female centaur who uses earth magic and has the lowest magic cost in the game. Her attacks are faster than anyone else’s and she does almost as much damage as Stern Blade. The final character is a giant called Goah, ridden by series favorite Gilius Thunderhead. Gilius wields death magic and this makes him the most powerful character in both strength and magic, however, he is incredibly slow.

There are a few fantastic additions to the gameplay from the original. You can now switch characters when you continue and there’s an incredible amount of new enemies which feature as well. We have to defeat tribal men, giant squids and grim reaper type foes on our journey. One of the most important differences is the inclusion of branching paths, which increase the replay value. There’s an increased diversity in the ridable mounts which all control a little differently. The two highlights are a giant mantis that snaps the enemy’s neck as a finisher and an undead dragon that’s stunningly animated. There are variants on mounts such as fire-breathing mantis’ and a scorpion that creates an arc of electricity with its claws.

There are also several weapons that your character can use. Mini catapults and ballistae are scattered throughout the levels, these can be mounted on your ridable creatures and fired while moving. You can also destroy projectiles when they are fired at you. Magic works differently from the original, as well as having different levels, you have one super powerful spell that uses a pre-set number of potions. 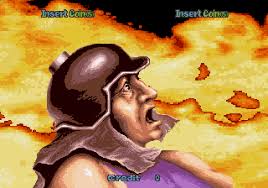 The basic fighting mechanics are the same with a few original additions, there’s a new kick attack which stuns enemies. An awesome running jump which culminates in a downwards stab attack, this can be performed even when riding a beast. There are also powerups to be collected when you smash wooden crates and switches that can be used to free captured slaves. The hit detection is also improved. I have noticed that Enemies deal a lot more damage and have the opportunity to stun you with each hit. This can be frustrating, but thankfully, the game allows you to continue as many times as you wish. Just keep pumping in the credits!

The graphics in Revenge of Death Adder are big, brash and beautiful featuring stunningly beautiful animation. Animations for characters being slain, staggered and knocked away really draw the player into the atmosphere of the title. The sprites also give the game a lot of unique personalities. This is evidenced when encountering tree men, once you strike them with a well-timed heavy strike they will immediately shatter and send their splinters flying into the screen. Thanks to the System 32 hardware the backgrounds are gorgeous, featuring evocative waterfalls, giant mushroom forests and even impressive scaling effects during specific segments of the game.

The music is composed by Masanori Takeuchi and is allegedly inspired by the Conan films. The soundtrack is punchy and helps add to the overall atmosphere. The sound effects help the combat feel suitably meaty and, thankfully, it doesn’t feature the ridiculous death screams of the enemies lampooned from the original.

This is one of the best games ever made and shows Sega at the top of their game. It’s disappointing that home audiences weren’t able to experience this but perhaps it is best that this was played in the arcades. It’s a powerful, evocative beat-em-up which will keep you coming back and pumping credits into the cabinet until you defeat it.

Never released on Home Consoles, Revenge of Death Adder is considered to be the best in the classic Golden Axe series. This is a fun, fantasy fueled romp where we pick a character and proceed to beat seven shades out of our enemies. Fun, frantic and full of differences from the original.

Chris McAuley is a Northern Irish born author, comic book and gaming columnist who has now branched out from talking about comics to helping create them. An acclaimed colourist for 2000 AD and Marvel he has worked on flagship titles such as Judge Dredd, Roy of the Rovers and Hulkverines. Chris also has a commitment to the Indie scene being an inker and colourist for ‘The Lang Way Hame’ a Scottish comic which is tipped for an award later this year. With close ties to heroes of the industry such as the ‘Godfather of British comics’ Pat Mills and Spawn creator Todd McFarlene,

Chris McAuley is a Northern Irish born author, comic book and gaming columnist who has now branched out from talking about comics to helping create them. An acclaimed colourist for 2000 AD and Marvel he has worked on flagship titles such as Judge Dredd, Roy of the Rovers and Hulkverines. Chris also has a commitment to the Indie scene being an inker and colourist for 'The Lang Way Hame' a Scottish comic which is tipped for an award later this year. With close ties to heroes of the industry such as the 'Godfather of British comics' Pat Mills and Spawn creator Todd McFarlene,